Remembrance Day 2021dawned rather grey and threatening but by 11 o’clock (which is the traditional time for Remembrance services) the sun was shining and it was a beautiful day.

This year the Field welcomed Central Lancaster High School and classes from three local primary schools for the event. Christchurch and Castle View Primaries did not have far to come, but this year we were delighted to welcome Cathedral Primary for the first time. They made the rather longer walk from  their school and arrived at the field first. While waiting for the other children to arrive, the Chair of the Friends was able to tell the Cathedral children about the Whalley family, how the Field was donated to the children of Lancaster by Miss Whalley in memory of her brother (who was killed in the First World War) and her father. The stone and plaque at the top of the Field record the fact that the Field is now recognised as a War Memorial. Paul then reminded the children that the Field is available for all local children to use, something that may be of particular relevance to the Cathedral School as they have no green open space of their own. 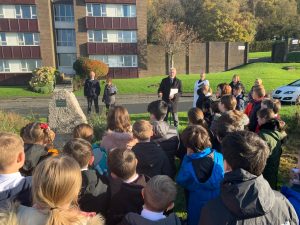 With the other schools now arriving, there were nearly 150 people present, the largest crowd we have ever seen for Remembrance Day.

Paul then handed over to the Rev Carol Backhouse for the formal proceedings, and wreaths were laid in memory of the victims of War. 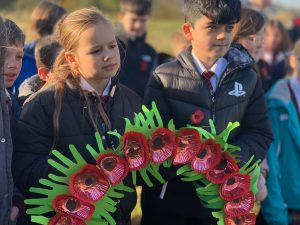 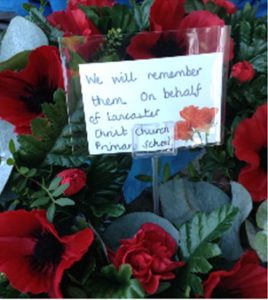 The Memorial stone was left looking rather splendid; a fitting tribute to those who lost their lives:- 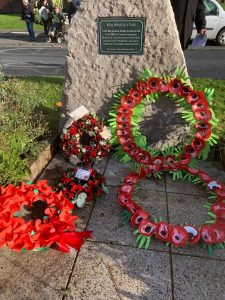 Particular thanks are due to all the school staff who accompanied their pupils to the event and to the Rev Carol Backhouse. There’s a lot more to being a vicar than simply giving sermons and Rev Carol has proved she’s also a good organiser – a vital skill! We  look forward to welcoming her and all the local schools to the Field over the next year. Hopefully by next year we might even have our own wild flower meadow to serve as a living memorial to those who died.