Miss Whalley’s Field was left in trust to the children of Lancaster in the will of Miss Geraldine Whalley who died in 1939. The bequest was made in memory of her father Colonel Joseph Lawson-Whalley and of her brother Captain Julian Whalley who died On 3rd December 1917 after the battle of Cambrai in France.

Exactly one hundred years after Julian Whalley’s death, local people assembled on a beautiful winter’s morning to celebrate this gift and to unveil a memorial stone and plaques installed by the Friends of Miss Whalley’s Field.

The ceremony began with the arrival of a smartly drilled troop of cadets from the Army section of LRGS Combined Cadet Force, with their Officer in Charge Dr Nicholas Thorn. 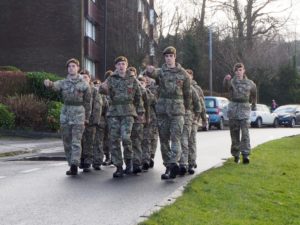 The cadets formed up in front of the memorial stone and the Chair of the Friends of Miss Whalley’s Field welcomed local Councillors, the Lancaster MP, the Mayor and Mayoress of the City and a large crowd of local people. There was a special welcome for Jean Argles, the great-niece of Miss Whalley who had previously been unaware of her relative’s gift of the field back in 1939.

The Mayor, Mr Roger Mace introduced the ceremony explaining the significance of the centenary and giving his support to the recognition of the Field as a war memorial.

At 11a.m. James Marsh, a bugler from the cadet force, played the Last Post. Daniel Sumsion from Lancaster Royal Grammar School then read  the poem For the Fallen by local poet Laurence Binyon, first published in 1914.

The mayor then unveiled the memorial stone. On one side of the stone is a plaque commemorating the gift of the field to the children of Lancaster in memory of Julian Whalley. On the other side, a plaque records that the field is now a Centenary Field under a scheme sponsored by ‘Fields in Trust’ and the Royal British Legion, making the field a war memorial. 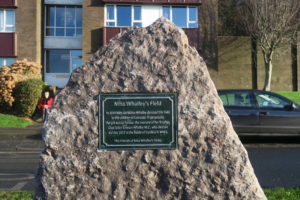 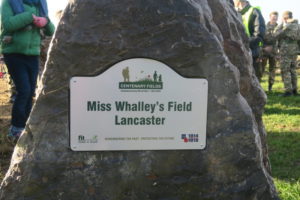 The invited dignitaries then posed for photos around the stone. The picture below shows (from left to right) County Councillor Lizzie Collinge; Cat Smith MP; Jean Argles; the standard bearer from the Royal British Legion; the Chair of the Friends; the Mayor and Mayoress of Lancaster. 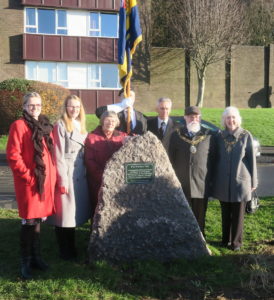 Near the stone there is also a new bench installed as part of this project. The foundations  include ‘time capsules’ from Ridge Primary School and Central Lancaster High School and it was great to see so many young people at the ceremony, some of whom may be present when the capsules are dug up, perhaps in 50 years’ time!

The invited guests then retired to The Gregson for refreshments and to reflect on a job well done.

The fact that the Field is now a dedicated Field in Trust means that it has another layer of protection from unwanted development.

It is now up to the Friends of the Field to devise and manage the future of the field in a way that respects Miss Whalley’s wishes and reflects the views of local people. If you are not already involved, come and join us and have your say!

The Committee of the Friends would like to record their gratitude for the generosity of local organisations and companies in making it possible to install such a fine memorial. Without their help and support this would not have happened: